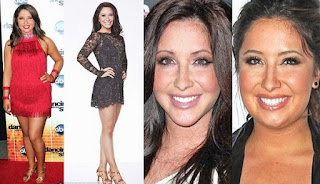 Reality TV star Bristol Palin is raising eyebrows for her dramatic transformation in the promo photos for season 15 of “Dancing With the Stars.” The final contestant, Cheetah Girls singer Sabrina Bryan, was confirmed on Aug. 27, 2012, setting the stage for a stacked field of competitors.

In the newly-released promo pictures, Bristol appears significantly thinner than when she competed on “DWTS” in 2010, when she placed third overall.

Palin, who recently declared that her main goal this time was to “not gain any weight,” was harpooned two years ago as the only “DWTS” contestant to ever gain weight while competing on the reality TV competition.

Bristol, who has slimmed down considerably since then, underwent chin liposuction and jaw surgery in December 2010 to get rid of her chubby cheeks and double chin.

“I am absolutely thrilled with the results,” Palin told Us in 2011. “I look older, more mature, and don’t have as much of a chubby little baby face!”