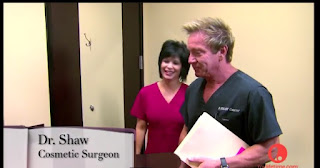 The SHAW Center for Aesthetic Enhancement in Scottsdale, Arizona, was pleased to be visited recently by Bristol Palin and her younger sister, Willow. The SHAW Center was included as part of a recent episode of Bristol’s television show, “Bristol Palin: Life’s a Tripp.” This lively, enthusiastic pair was referred by a friend of Bristol’s; each young woman had a session of CoolSculpting™. The entire episode can be seen here:
http://www.mylifetime.com/shows/bristol-palin-lifes-a-tripp/video/season-1/episode-11/episode-11-bearizona
It was a memorable day. We found a way to squeeze a camera crew and equipment into our treatment rooms, and enjoyed gauging their different reactions to the procedure. This is a great way for the public to get an idea of what CoolSculpting™ involves. During the episode they raised the question, “What happens to the treated cells?”
The body starts to eliminate them over time by the natural metabolic process. When cooled just above the freezing point, fat turns from liquid to solid (much like butter) and over the next few weeks after the treatment, that cooled fat will start the apoptosis process (controlled cell elimination), which leads to a release of inflammatory mediators. Within the next months, these inflammatory cells gradually digest the fat cells. The lipids resulting from those cells are then metabolized like any other food fat – they are transported by the lymphatic system and then processed out of the body. As this happens, the circumference shrinks around the treated body areas (sometimes up to one centimeter with a single treatment). Of course, a more thorough explanation can be read on our website: http://www.coolsculptingscottsdale.com.
It takes several months to see the best results from the CoolSculpting™ process. We look forward to hearing from both Bristol and Willow about their results.
Leave comment
Call us (480) 767-1900
info@theshawcenter.com 8913 E. Bell Road #201 Scottsdale, AZ 85260
[contact-form-7 404 "Not Found"]